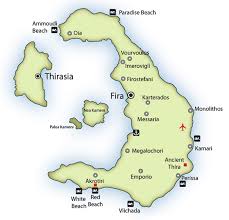 Recently I had the privilege to attend the ERES 2017 conference on European Rare Earth Resources in Santorini, Greece from the 28th to 31st of May 2017. The conference was about Rare Earth Elements (REE), which consists of the fifteen lanthanides, scandium and yttrium. About 250 people attended the conference. The attendees were policy makers from European commission, professors from various universities, leaders from industries and researchers (Post-docs and PhDs) from both university and industry. They were mostly from Europe, but there were also few from USA, Canada, Brazil, Turkey, Mongolia and China. 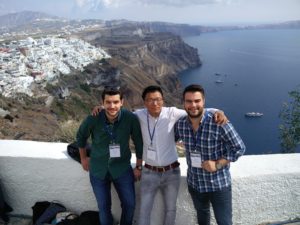 Me with fellow conference attendees from SOCRATES project

The conference was a very good learning experience for me. The take-home message is that Europe is struggling to meet the increasing demands for REEs, especially due to increasing popularity of electric vehicles. The problem is further exacerbated by Chinese monopoly over REE market, which leaves Europe and rest of the world very fragile and highly dependent on supply from China. European commission taking it seriously to solve this problem but they are far from reaching a solution. 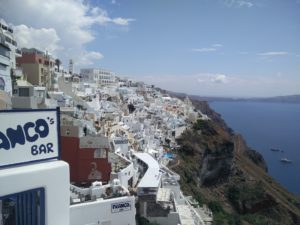 Mining industries are confident of having sufficient REE deposits in Europe to meet the increasing demand for few decades but the obtaining a social license to operate slows down the opening of new mines, thus preventing them from exploiting the deposits at a reasonable cost. The research groups successfully came up with fully-functional extraction processes and systems but EU has to do more to implement these results at industrial scale and commercialize them. The EU representative concluded the conference by petitioning everyone to still believe in EU and its REE plans and that REEs crisis can be solved with the dedication and hard work of everyone. 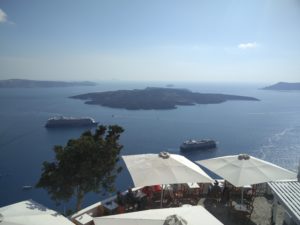 View from Fira with the volcanic island Nea Kameni at the centre.

The conference lasted for 2 and half days and there were intensive presentations on REE deposits in Europe and beyond, other REE recyling (industrial by-products, Magnet, bauxite residue, urban mines), REE extraction from those resources, separation technologies and REE sustainability. It was concluded with a full day trip to archaeological site of Akrotiri (ancient city from 1627 BC), followed by boat trip to a volcanic island called Nea Kameni and swimming in a hot spring.

I saw the pictures of the white houses of Santorini since I was a small kid but I never thought I would get the chance to visit it, especially for business reasons. The panoramic view from the top of capital city of Santorini, Fira is simply breathtaking. I just could not get enough of those beautiful white houses (few with blue domes) sitting on the edge of a Cliff, overlooking the Aegean sea with Volcanic island Nea Kameni in the middle of it and huge cruise ships coming and going. It was a sort of place, which can make your problems disappear and makes you thank god for letting us live in this beautiful world. 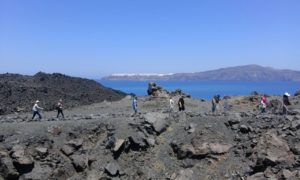 On the top of volcanic island Nea Kameni.

However, Santorini is not just a beautiful panorama. It is extremely interesting for geology and history enthusiast as well. Santorini is a remnant of enormous volcanic eruption, which destroyed the earliest settlements on a formerly single island, and created the current geological caldera. The most recent volcanic eruption was seen on Nea Kameni between 1939 and 1941.  The Nea Kameni Island has a crater with many active sulfur vents and its ground is burning-hot when 5 cm of upper soil is dug out. The archaeological site of Akrotiri was destroyed by volcanic eruption in 1627 BC and thus buried in ash, and the site was excavated since 1967. 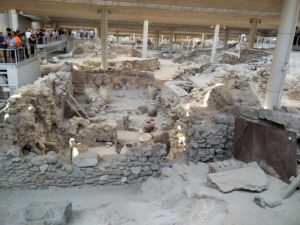 If you want to know more about the ERES 2017 conference, please go to the following websites :