Dear readers! I would like to describe some of the concepts of my everyday work by comparing it with a well known social activity: going to a cocktail bar!

First of all, me remind you what my job is. I am a theoretical chemist, also called computational chemist, or nerd, and my work is to simulate chemical systems, just with the aid of my computer. A theoretical chemist should be able to exploit as many theoretical approaches as possible, but due to the broad amplitude of the field (ranging from classical approaches to quantum chemistry approaches, with a plethora of many branches in the middle), one always ends up specializing himself in one of the fields. Nevertheless, my overall experience covers a wide range of techniques.

Let’s start with clarifying what a molecular dynamics simulation is:

Everything starts from a virtual box, our “cocktail bar”, which you create with your computer. What do you usually do with boxes? You fill them with stuff, and in my case, the “stuff” are virtual molecules, ions, atoms and sometime electrons. In the case of our “cocktail bar’’, those are the people! The second step is to make those people move and interact with each other. The used approach in a cocktail bar is simply to play a music. A nice groove will make people move. Here, different music will make people move in a different way.

So, now we have a cocktail bar (a virtual chemical system), where people are dancing, talking and drinking. In this case the theoretical chemist turns into a sociologist, and starts studying the interactions between the people. And here come in the statistics!

There are several statistical instruments: 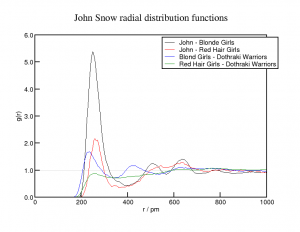 RDFs describe the interaction attitude between different kind of people in the bar. In the proposed example, let’s pretend Jon Snow is at the party, and that he is attracted to all the wonderful girls around him. Now, we know that Jon has a weakness for red haired girls, but we also know that (spoiler alert) he has a weakness for blond girls too. In the picture we can see that the attraction between Jon and the blond girls is stronger, as the peak height describing this attraction is higher (that might be due to the dragons? Who knows…). Also, we know that blond girls are attracted to Dothraki warriors more than to red haired girls, but everyone still prefers Jon Snow. 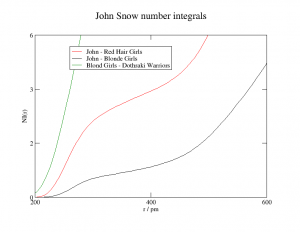 So, is Jon Snow dancing with blond or red hair girls? As we all know very well, most of the time, the bare attraction towards someone is not enough: other circumstances may play an important role. That is why we need the number integral, to check who is dancing with who, and in our case, Jon “knows nothing”, since he is dancing with the red haired girls. The explanation for this situation can be found in the green line, representing how many Dothraki warriors are dancing with the blond girls. In facts, although Jon and the blond girls are really attracted to each other, the Dothraki warriors are numerically dominating the dance floor. From the RDFs we know that Jon would like to dance especially with blond girls, but he cannot because of the presence of an army of Dothrakis, who are not particularly interested in the girls, but they are so many that just a few of them dancing around is already enough to prevent Jon from dancing with the blondes. 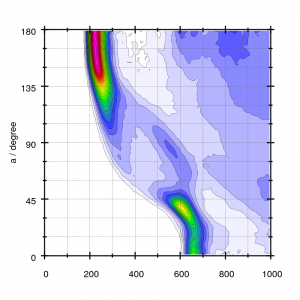 Next step: the Combined Distribution Function (CDF)! The CDFs are a combination of many distribution functions. In order to explain the concept we can imagine the situation in front of the bar. In order to interact with the bartender everybody will approach the desk from a different distance and angle, since everyone wants to order in the fastest way. We can describe this interaction with a combined distribution function. In the example shown, the colors represent how often someone approaches the bartender from a certain distance and angle. For example, 180 degree describes the area in front of the bartender, and of course everyone will try to get to that position to order cocktails, because that position allows to get closer to him (x-axis). 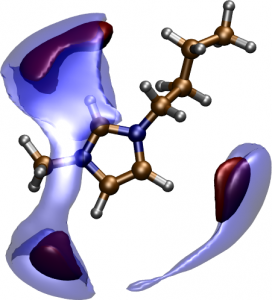 The last statistical analysis which I want to describe (others may be described next time) are the SDFs. Unfortunately I don´t have a cocktail bar example for them (can you suggest me one?), but I think the figure can talk for itself. The figure represents the spatial statistical positioning of a particle around another. In the figure, the red and blue clouds represent the positioning of two different particles around the molecule in the center.

I hope with the above you got an insight in all our amazing graphs we generate. Let me know if I succeeded in my attempt to make something which could be boring or complicated, fresh and understandable. If you have any questions or comments, or want to share your suggestions on how to ‘cocktail-bar-compare’ the SDFs, do not hesitate to contact me! My email is: macchieraldo@thch.uni-bonn.de

I wish you all the best! 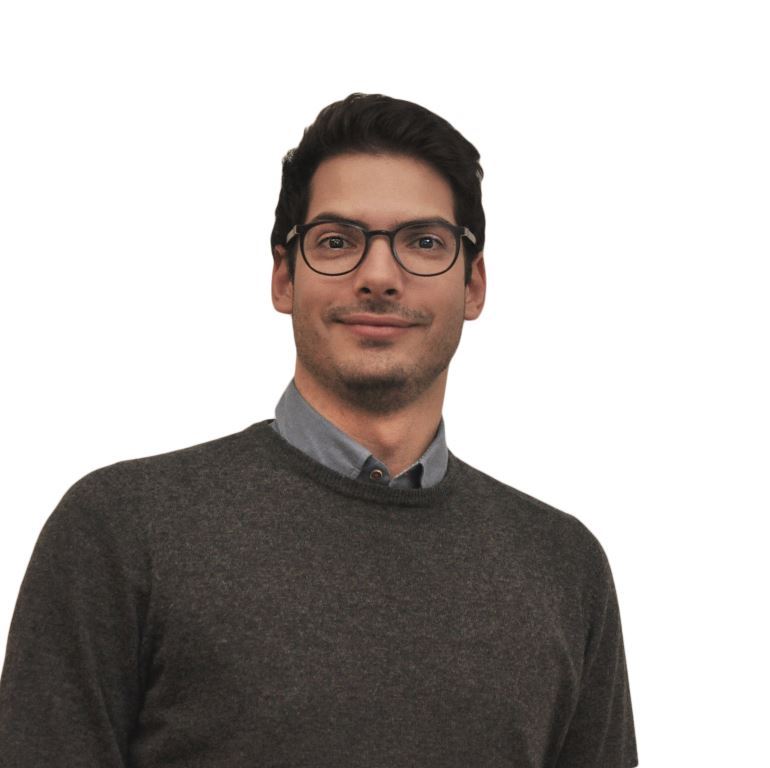 My name is Roberto Macchieraldo and I am ESR 9. I am Italian and I was born in Biella, a small town close to Turin, in the north of Italy. Although right now I am a researcher (or I pretend to be at least), in my life I had several experiences, in Italy and abroad as well. I had the opportunity to work for GSK, a pharmaceutical company, in the field of the Quality Assurance. And here I am now, working in Germany as a researcher, seeking my PhD, which is onto the “miscibility of solvent systems that are relevant for metal extraction by theoretical methods”.
2017-11-22
Giacomo Damilano