Bauxite residue is a solid waste formed during the production of alumina in the Bayer process. Due to the big amount produced every year and to the large amount already stockpiled, the production of this residue represents a serious concern for the alumina producers. On the other hand, bauxite residue can be an interesting source not only for major elements such as aluminium, iron and titanium, but also for rare earth elements due to their relatively high concentration. Several authors have reported different methods based on hydro- and/or pyrometallurgical technique to recover metals from the residue, particularly rare-earth elements. However, despite a high recovery of rare earth elements can be achieved by conventional acid leaching of bauxite residue, the concentration of rare-earths in the leachate is still about one hundred times lower than the concentration of major metals, such as iron or aluminium. Furthermore, the presence of silicate compounds makes the treatment of bauxite residue by acid leaching very difficult due to the polymerization of silica, which is a serious and common problem in hydrometallurgy. This limits the further recovery of rare-earths elements. However, by considering dry digestion and water leaching methods as processes integrated in a multi-stage treatment, not only silica polymerization is avoided, but also a significant increase in the concentration of rare-earth in the leachate is possible. This work is now published in the Journal Minerals Engineering (Leuven, RM, 19-2-2018). 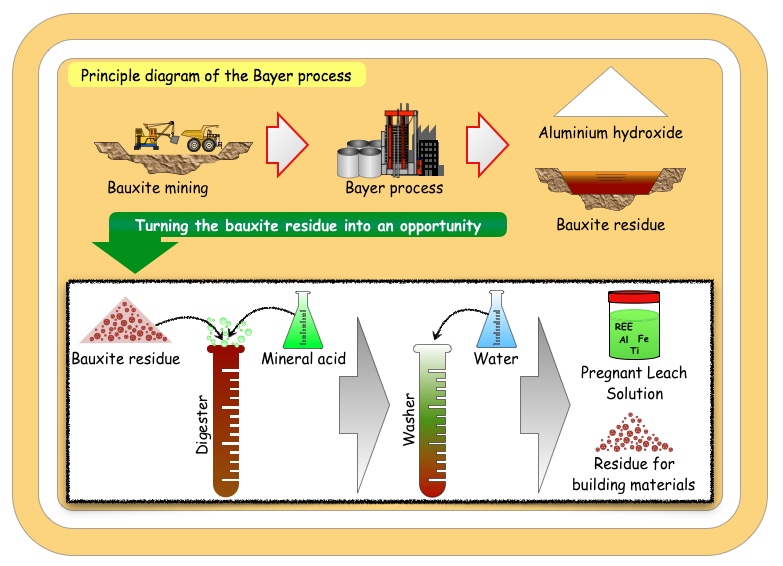 Bauxite residue (also called red mud) is a solid waste formed during the production of alumina in the Bayer process. It has been estimated that about 140-150 million tonnes of bauxite residue are generated every year and, approximately 4 billion tonnes of this material have been already stockpiled during the last decades. The disposal and long-term storage of such material occupy large extension of land, which results in major costs and liabilities for alumina producers. However, bauxite residue represents an interesting source not only for major elements such as aluminium, iron and titanium, but also for rare-earth elements due to their relatively high concentration.

The dry digestion method is an effective way to avoid the polymerization of silica. The principle behind the method reside in the interaction between the metal and the acid in a water deficient system, so that no hydration of the silica is possible. This way, the silica polymerization is avoided, and the dehydrated silica (i.e. SiO2) is readily filterable. The most remarkable advantage of this methods resides in the fact that it takes place at ambient temperature. The application of this method on bauxite residue was studied considering two consecutive processes: (1) dry digestion of bauxite residue with highly concentrated acid, and (2) subsequent water leaching and filtration of the digested bauxite residue. Only about 5 wt% of silicon dissolution was achieved due to the low amount of water used during the process. About 40 wt% of scandium was recovered unfortunately with a high co-dissolution of iron, because scandium(III) ions tend to be associated to the lattice matrix of iron(III) oxide minerals. Nevertheless, the combination of the dry digestion method with multi-stage circulation of the acid (pregnant) leaching solution significantly increased the rare-earth elements concentration up to 20 ppm, while achieving a considerable reduction of water consumption (60%).

The preliminary comparative economic analysis has shown that dry digestion with sulfuric acid and multi-stage leaching is the most interesting method for the extraction of scandium and titanium from bauxite residue. However, this method still needs more studies at pilot-scale. The method looks promising, but further studies are required to increase the extraction of scandium.