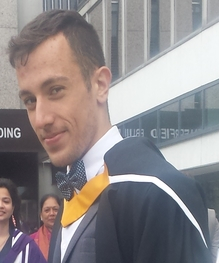 My name is Giacomo Damilano, I am a green chemist from Italy and I am the ESR 8. As I was a child, you could have asked me what I would like to be when I would grow up and I would have replied the mad scientist! Being that I pursed a field of chemistry that “aims to the moon” (a green future), I think I attained to my childhood fantasies.

Science always captivated me and chemistry, being an inventive and creative person, seemed to be the most appropriate science field to study! To be sincere, I was not always a green chemist; I started laying down the common groundings of pure chemistry in my Bachelor degree studies at the University of Bologna. Then, I moved to London to pursue my Master studies in green chemistry at Imperial College of London, one of the greenest periods of my life!

Even today, I have fond memories of that experience outside my own country; a tough experience that I would strongly suggest to anyone. In London, I started researching on Ionic Liquids, a marvellous and exciting field of research full of twists and novelty. These experiences were even more relevant to me as a person because allowed me to understand the importance to proudly own your identity, something I learnt from the Dean of Natural Sciences Tom Welton whom advocated for diversity among scientists and visibility for the LGBT community in science, community to whom I personally belong.

Lately, I started my PhD studies here at KU Leuven into the synthesis of novel Ionic Liquids starting from renewable materials. Ionic liquids are marvellous materials to carry on research! They are salts liquid at about room temperature with unique proprieties as, for example, nearly non-existent vapour pressure, which avoids both financial and environmental issues related with solvents evaporation.

Leuven is a fantastic working environment for carrying out my research, just in the centre of Europe and in a dynamic group of bright and passionate researchers from all over the world. Professor Dehaen and Professor Binnemans are directing me in my personal researcher growth and research and I am grateful to them and to my colleagues for sharing with me their experience in this field.

May you be interested to my argument of research, you are more than welcome to get in touch with me at: giacomo.damilano@gmail.com

The aim of this thesis is directed at the synthesis of ionic liquids and extractants for solvometallurgical separations of metals. The project revolved around the concept of the production of extractants embedding beta-branched chains. This was aimed in the attempt to produce analogues of the currently available extractants with improved physico-chemical properties and possibly strategic advantages in their use for SX processes (e.g. higher process stability). The improvement caused by the introduction of beta branched chains was supposed in relation to the well demonstrated appealing physico-chemical properties reported for the Guerbet alcohols and the strong industrial interest revolving around these materials. In order to achieve a potential industrial use, three aspects of the research had to be closely monitored: economic feasibility, environmental sustainability and technological applicability. In any successful novel application, the synthesised materials have to be stable in the application, competitive against available ones, and recyclable after use. The materials targeted herein were designed to meet the needs of stability, low cost, and recyclability. Further studies will be needed to assess the actual suitability to the application as metal extractants.

Ionic liquids were tailored to hold convenient features for metal recovery processes as hydrophobicity and base stability. Opposed to common practice, hydrophobicity was introduced in the cation instead of the anion. This choice was made by design, because of its key advantage of impeding cation exchange throughout metal extractions. Generally, hydrophobicity is introduced via fluorination but fluorine use has numerous drawbacks (i.e. being noxious, dangerous, biohazardous, and expensive). Therefore, fluorine use was avoided via the use of ß-branched fatty alkyl-chains. The research has been addressed by defining a convenient and scalable pathway of production for such beta branched chains. This was done by addressing the production of beta branched aldehydes in a multi-step synthesis starting from linear aldehydes. Aldehydes were addressed in relation to their higher reactivity with respect to other functional groups. Though, the higher reactivity demanded for the isolation in high purity of these materials in order to avoid their decomposition, the interference for the following functionalisation, and the availability of some amount of starting material for the testing of the following steps.

Aldehydes were obtained on large scale and then their functionalization was addressed. They were easily functionalized to tertiary amines via a Leuckart-Wallach reaction. Also, the aldehydes were tentatively functionalised to primary amines via a reductive amination but this was discontinued in relation to malfunction of the Parr bomb.
Tertiary amines were tentatively functionalized to their ammonium derivatives. It was tested that only di(alkyl)methylamine could be methylated to the respective ammonium salts with dimethylcarbonate, yielding the desired ammonium salt. Tris(alkyl)amines required more reactive reagents to yield the desired quaternary ammonium derivatives and therefore it fell off of our interest to pursue such research, especially in relation to the high viscosity experienced in the characterization of such amines.

The long beta branched alkyl-chains elicited a hydrophobic behaviour in the ionic liquids, extended their liquid range, and conferred base stability via hindering Hofmann degradative processes. Similar to the ionic liquids, also extractants (i.e. the tertiary amines) were synthesised exploiting the hydrophobicity and reduced viscosity conferred by the beta branched alkyl chains.

Following to the development of these novel branched ammonium and amino derivatives, we moved to more complex synthesis methodologies. Symmetric imidazolium ionic liquids were formerly synthetized in one-pot from ready available linear amines. Unfortunately, the discovered procedure could not be applied to our chains because restricted to derivatives with side-chains with about or below eight carbons. In order to allow the introduction of longer side-chains, we investigated such reaction and devised an effective procedure devoted to the production of derivatives with longer side-chains. The extension of the one-pot protocol to the synthesis of imidazolium ionic liquid has been extensively tested in order to allow the eventual use of the Guerbet primary amines as reagent for the production of symmetrical Guerbet imidazolium ionic liquids. The protocol was extended to alkyl chains up to sixteen carbons, allowing for the production of a series of lipophilic imidazolium salts in grams amount. These salts were studied for their physio-chemical properties, showing a surfactant behaviour, which may be useful in flotation experiments. Then, the acetate salts were derivatised via metathesis to some different ion pairs and further studied to investigate the material behaviour.

Differently from the analysis carried in the two former studies, the last study reported within this thesis focused on metal complexation chemistry. The study focused on a novel class of ionic liquids, easy to synthesise and derivable from commercially available and bio-derivable materials. In this study we analysed the influence of the substitution of oxygen atoms with sulphur atoms in the structure of known low-transition-temperature mixtures and on how it affects the physio-chemical properties and the dissolution of metal oxides within such mixtures. The use of various analytical techniques (i.e. FTIR, UV-vis and ICP-OES) allowed us to carry out a preliminary assessment of the potential of these mixtures for the selective recovery of late transition metals.

In all the studies outlined above, we expanded and fostered the research field of ionic liquids. Moreover, the work carried out in this body of research revealed new, meaningful research paths.

Beta branched amines and ammonium derivatives are promising materials as extractants in solvometallurgical processes; therefore, their ability to solubilize anionic complexes of metals (e.g. by loading the ionic liquid with hydrochloric acid as counter-ion for the formation of such complexes) should be cross compared with the commercially available ones. The absence of aqueous solubility and the enhanced stability to bases should assist in the metal recovery and the eventual ionic liquid recycling step.
Imidazolium ionic liquids are promising materials for various applications.

The synthesis of symmetric ionic liquids with long side-chains is an extremely significant result due to the many applicative uses they can fulfil. The lipophilicity of the material suggests a potential use as extractants, the surfactant behaviour indicates a potential use as foaming agent, and the formation of metal imidazole-2-ylidenes via oxalate precipitation suggests also a use as precursor of fatty catalysts covalently tethered to the metal catalyst. All of these applications benefit of the definition of a one pot procedure capable to attain an halide-less formation of lipophilic imidazolium acetate salts. Moreover, the pinning of a reaction mechanism to a path encompassing a 2,4,6-trialkyl-hexahydro-1,3,5-triazine intermediate have a potential further optimization of a reaction towards a one-pot synthesis of asymmetrical imidazoles (Figure 22, for example, 2,4,6-trimethyl-hexahydro-1,3,5-triazine, a primary amine, and glyoxal in equimolar amounts in presence of 1.5 equivalents of acetic acid to obtain the 1-methyl-3-alkyl-imidazolium acetate derivative). Lastly, the extension of the reaction procedure to longer alkyl chains now allows for testing the production of ionic liquids with the beta branched primary amines. These amines would be directly derivable from our formerly synthesised beta branched aldehydes. If the beta branching would not interfere in the 2,4,6-trialkyl-hexahydro-1,3,5-triazine intermediate formation, than this of imidazolium ionic liquids would be synthesisable via this procedure and it would have a surely interesting physio-chemical behaviour. 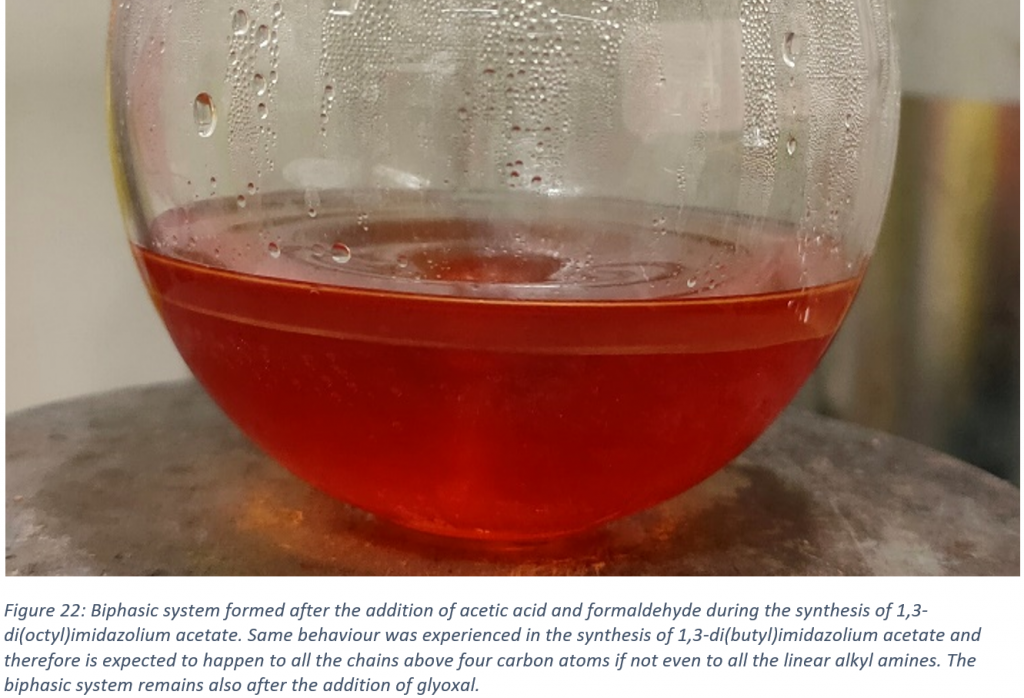 On a slightly separate note, thiol functionalized low temperature transition mixtures studies allowed to identify an remarkable subclass of low transition temperature mixtures. The introduction of sulphur in the structure of the molecules allows for a weakening of the thickness of the mixture and elicits a selective affinity towards late transition metals. In the context of the currently increasingly stringent policies, the study of a cheap LTTMs with a high affinity to poisonous metals may result convenient in the perspective of purifying the residue of the processed ores. The affinity towards copper makes of this system also an interesting candidate for copper extraction and recovery (Figure 23). Further studies could focus on combining the outlined behaviours in a targeted recovery process or attempt a further modification of the structure in order to obtain even more favourable properties.

In conclusion the work we carried out was able to define novel and more straightforward procedures for the synthesis of a wide of lipophilic extractants. Further studies will need to be focused on the in depth analysis of these materials in applicative case scenarios to determine their actual value for solvometallurgical processes. 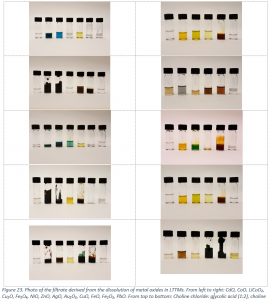