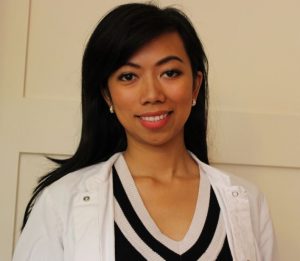 Hello! I am Jennifer Astoveza, from the Philippines. With much passion for science and sustainability, I joined the Socrates project as an early stage researcher, tasked to explore the viability of using industrial residues as supplementary cementitious materials (SCM) in calcium aluminate blended cements (CAC).

I graduated with a bachelor’s degree in Metallurgical Engineering at the University of the Philippines – Diliman in 2012. Placing 2nd in the National Licensure Examination for Metallurgical Engineers in 2012 has paved a great opportunity for me to start a career in the metallurgical industry. I initially spent 6 months as a management engineer trainee in a Glencore-Xstrata copper smelter and refining plant, PASAR Corporation. I was then hired as process engineer in the Doré (gold-silver/ precious metals) plant of the company and was likewise trained as a shift manager in the Electrolysis Department. I served the company for almost 3 years before I decided to pursue a master’s degree abroad.

In 2015, I was awarded with an Erasmus+ scholarship for the EMerald program ─ Masters in Georesources Engineering with a focus on geometallurgy. The program allowed me and my colleagues to spend one semester of the 2-year degree, studying in each of the 4 host universities: Université de Liège (Belgium); Université de Lorraine (France); Luleå University of Technology (Sweden); and TU Bergakademie Freiberg (Germany). I completed my thesis semester in 2017, having an internship at the Helmholtz Institute Freiberg in Germany, where I worked on a project focused on cassiterite flotation and pre-concentration operations.

My masters study kindled my passion for the concept of “Circular Economy” ─ the idea of a regenerative resource cycle with a focus on minimization of wastes through process optimization, substitution and recycling. This concept invigorated my interest in pursuing a research inclined towards recycling, especially of the wastes in metallurgical plants. With this direction in mind, I decided to accept the offer to join the Socrates team ─ a perfect fit for my research topic of interest. I am looking forward to expanding my knowledge towards cement chemistry as I explore the valorisation of industrial residues as supplementary cementitious materials. I will be mainly based at the Kerneos Research and Technology Centre in Vaulx-Milieu, France ─ a leader in calcium aluminate technologies.

If you are interested in my topic and you wish to learn more about it, please don’t hesitate to get in contact with me at jennifer.astoveza@kuleuven.be

The extensive efforts on reducing the carbon footprint of cement production have motivated the investigations on the use of supplementary cementitious materials (SCM) as additive and/or substitute in cement blends. However, previous studies were focused on limited types of SCM including natural pozzolans, ground granulated blast furnace slag (GGBFS) and fly ash – which could readily exhibit reactivity in cementitious systems. In this project, valorisation of novel industrial by-products (such as non-ferrous slags, municipal incinerator bottom ash, and jarosite residue) is explored to provide solution in reducing the volume of industrial landfills while creating greener materials for building applications. The main objectives defined by this project are as follows:

Techniques used in this study ranges from the conventional mechanical strength test, isothermal calorimetry, shrinkage-expansion test to assess the performance and early age hydration of the cement formulations incorporating the industrial residues; and extend into XRD and thermogravimetric analysis to study the phase assemblage evolution during the hydration process. More advanced techniques including X-ray computed tomography, SEM, TEM and Mӧssbauer spectroscopy, were also explored for a more comprehensive understanding of the mechanism of the slag hydration.

Among the industrial by-products investigated, the highly amorphous slags appear to have the highest reactivity in terms of long term strength (see Figure 29) in the cement blends developed. Although slow strength development in the first 28 days could be an issue in CAC-based applications, the industrial by-products could have potential as novel SCM with further modification and activation. With this promising performance, the focus of the study has been dedicated into unravelling the hydration mechanism of this amorphous high Fe slag in CAC systems.

Nanotom X-ray computed tomography (complementary with SEM-BSE image analysis) was utilized to provide an imaging-based approach in quantifying the degree of slag dissolution in the system, therefore relating to its degree of reaction (see Figure 5). The result confirms the reactivity of the slag as it dissolves in the system.

After demonstrating the reactivity of the slag through a combination of various techniques, the focus was shifted into unravelling the fate of Fe from the slag in the cementitious system. This was investigated using TEM (in complimentary with XRD, TGA and Mӧssbauer spectroscopy). The results (see Figure 30) suggest that the Fe tends to form an amorphous gel-like phase mainly associated with gibbsite in the first 90 days of hydration. Later on, this phase starts converting into a semi-crystalline phase associated with Ca, Al, and Si in varying proportions. This is in contrast to previous thermodynamic modelling simulations which suggested formation of Fe-containing ettringite and monosulfoaluminate phases where Fe is in solid solution with Al. Furthermore, Mӧssbauer spectra of hydrated pastes demonstrated the evolution of Fe species throughout the 1 year hydration time which could aid in building a strong hypothesis on the hydration mechanism of slag in the system. 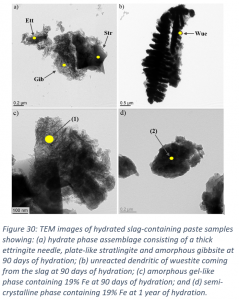 The granulated Fe-rich slag has clearly demonstrated reactivity in CAC systems, as was demonstrated using various physical and chemical techniques. Formation of a new amorphous gel-like hydrate phase in the first 90 days of hydration which later converts into a semi-crystalline phase is associated with the Fe dissolved from the slag. The focus of the remaining year of the thesis will be on the activation of slag to increase its hydration potential and understanding its behaviour in an ordinary Portland cement (OPC)-rich system.