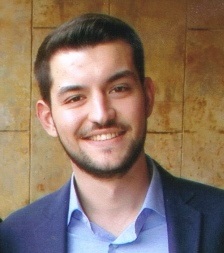 I am Nikos Nikolopoulos from Greece and I am ESR 14. I obtained my bachelor in Chemistry at the University of Patras. Furthermore, I have a master’s degree in “Catalysis, Environmental Protection and Clean Energy Production”. Lately, I joined SOCRATES and I am doing my PhD at Utrecht University. My PhD thesis focuses on the advanced characterization of metal-containing, low-grade metallurgical residues.

In this research project, advanced characterization will be performed on the complex residues, before and after the removal of metals by leaching. A detailed knowledge of the chemical and mineralogical composition of the industrial-process residues (Cu flotation tailings, Fe-rich hydrometallurgical sludges, fayalite slags and incineration ashes) is essential for the extraction of metals by innovative leaching methods and for the valorization of the residual matrices as cementitious binders, inorganic polymers or heterogeneous catalysts.
But the real question to a scientist is “What or who motivates and inspires you?”. I truly believe that the most motivating thing is that I am part of this huge effort for a better future. And as Socrates said: “The secret of change is to focus all of your energy, not on fighting the old but on building the new”.

If you are interested in my topic and you wish to learn more about it, please don’t hesitate to get in contact with me at: n.nikolopoulos@uu.nl

Nowadays, the amount of industrial solid wastes from various sources, including metallurgy, and the related waste management, draw global attention as it is proven that they can be dangerous for both our environment and health. Because of that, it has been an unresolved issue which actions need to be taken. For example, waste flotation tailings can react with water and oxygen when exposed to atmospheric conditions and as a result they produce acidic wastewater and sulphates. These deposits mainly consist of many different minerals, like aluminum oxide (Al2O3), calcium oxide (CaO), ferric oxide (Fe2O3), calcite (CaCO3) and silicon oxide (SiO2). Many attempts have been made in order to give a solution to this problem. Researchers have been tried to valorise silicon-rich wastes (e.g., fly ash) as potential source for the preparation of heterogeneous catalysts. Many studies have examined the synthesis of different types of zeolites using fly ash or similar type of waste streams via conventional hydrothermal methods. Recent studies have shown advances in the synthesis of waste-derived zeolites, however it is not well-known what is the effect of various impurities on the properties of these waste-derived zeolites. As a result, the goal of this study is to examine the impurities effect, originated from industrial residues, in waste-derived zeolites. By using an in-depth characterization and evaluation of waste-derived zeolites, we assess their feasibility for catalysis, e.g., the methanol-to-olefins (MTO) process. Last but not least, the stability of the waste-derived zeolites under hydrothermal treatment (steaming) will be studied. Characterization, before and after steaming, will help to understand how the impurities affect their physicochemical properties and their catalytic performance.

The samples were also tested for their catalytic performance in an MTO reaction using an operando UV-Vis set-up.

The industrial process residues have been characterized, prior to the removal of metals by leaching, in order to find out how the chemical composition, crystalline phases and morphology of the solid materials can influence the leaching process. X-ray Fluorescence (XRF) and Inductively Coupled Plasma Optical Emission Spectrometry (ICP-OES) provided the exact elemental content of the four families of waste materials. Scanning Electron Microscopy (SEM-EDX) provided morphological data of the samples, at the same time displaying the elemental distribution. X-ray diffraction (XRD) gave information on the mineralogy of the different samples. Furthermore, we gained more knowledge about the porosity and the morphology of all four families of low grade industrial process residues using N2 physisorption, Scanning Electron Microscopy (SEM) and Focused Ion Beam – Scanning Electron Microscopy (FIB-SEM). Last but not least, EPMA was used in order to trace and quantify the critical and economically important elements in the samples and to identify the mineral phase of the samples.

As illustrated in Figure 35, we have synthesized waste-derived zeolite ZSM-5 and have investigated how the impurities present in the waste material affect the zeolite framework, their catalytic activity and the related deactivation during the MTO reaction. The morphological, textural and acidic properties of the waste-derived zeolite ZSM-5 (with and without impurities) have been compared to commercially available zeolite ZSM-5 (Com HZSM-5). ICP-OES showed the existence of Fe, Ca and Mg in low concentrations. UV-Vis spectroscopy indicated mainly the formation of isolated Fe3+ ions and some amount of oligonuclear Fe species. Moreover, NH3-TPD as well as Py-IR and CO-IR spectroscopy revealed that the zeolite with higher content of impurities had less Lewis and Brønsted acid sites. The above-mentioned phenomenon can be explained by the incorporation of Fe in the zeolite framework and by the existence of Fe2+, Ca2+ and Mg2+ species in the pores of the zeolites. The effects of the impurities, and therefore the reduced amount of Lewis and Brønsted acid sites, on the catalytic performance has been evaluated. These catalytic tests showed that waste-derived zeolite ZSM-5 materials are active in MTO and the sample with a higher content of impurities showed initial higher selectivity towards propylene (Fig. 1; i.e., sample S10 HZSM-5).

We have synthesized waste-derived zeolite ZSM-5 and have investigated how the impurities present in the waste material affect the hydrothermal stability, their catalytic activity and the related deactivation during the MTO reaction (before and after steaming). Waste-derived zeolites ZSM-5 were steamed for different times (15, 30, 120 and 300 min). As illustrated in Figure 36 (green section), Py-IR was used as a tool to probe the changes in the acidity of the zeolite resulted by the hydrothermal treatment. It can be seen that in every sample there was a decrease in Brønsted acid sites (BAS). The aforementioned phenomenon can be explained by the fact that steaming will result de-alumination of the zeolites and thus more extra-framework aluminium. However, regarding Lewis acid sites (LAS), it can also be observed a decrease for Com HZSM-5 and S3 HZSM-5. In contrary, S10 HZSM-5 (sample with higher amount of impurities) initially showed a decrease in LAS but in later stage of steaming it can be seen that LAS are increased. This can be attributed to the amount of impurities which is higher in S10 HZSM-5. Furthermore, the samples were tested for their catalytic performance in the MTO reaction (before and after steaming). As illustrated in Figure 36 (gray section), steaming of zeolites helped in stability and the selectivity towards propylene. It can be noticed that waste-derived zeolites showed great stability over hydrothermal treatment and stayed active and selective even after 300 minutes of steaming. Last but not least, S10 HZSM-5 exhibited higher conversion after 120 and 300 min of steaming which can be attributed to the higher amount of LAS created by steaming.

Outlook for further work: Further research can be done in this field: