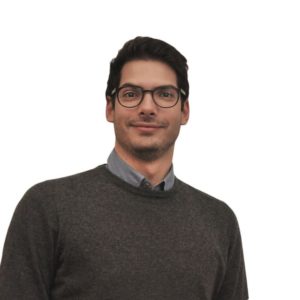 My name is Roberto Macchieraldo and I am ESR 9. I am Italian and I was born in Biella, a small town close to Turin, in the north of Italy. Although right now I am a researcher (or I pretend to be at least), in my life I had several experiences, in Italy and abroad as well.

But let´s make a step back. I took my chemical degree in Turin and I had lived there during that period. Turin is an amazing city, big enough to offer anything you need, but still small enough not to make you feel small and alone. Moreover, people there are friendly and let you be yourself and as I am Italian I must say that the food is great. If you love chocolate especially. During that period, I also had the opportunity for an internship in Paris, and well, it is Paris, do I need say anything more?

Once finished my studies I moved back to Biella, looking for a job, and there I worked in a small but solid company which produce non-woven fabric (you know diapers and tampons? Well, non-woven fabric is what they are made of). After a year, I felt I needed something different, so I moved to Siena (one of the most amazing place in Italy, in my opinion) where I attended a master in Drug Design and Synthesis. Thanks to that master I had the opportunity to work for GSK, a pharmaceutical company, in the field of the Quality Assurance.

I must admit that the period spent in Siena has been one of the happiest in my life. I would like to describe Siena, but I would go long so I recommend any curious reader to google it and book for holydays as soon as possible! (No I am not paid by the city of Siena, but if the mayor of Siena feels like, I will accept any present for what I just said).

During that period, I had an interview in Belgium for an open position as early stage researcher (ESR) in a European project called Horizon2020-Socrates. And here I am now, working in Germany as a researcher, seeking my PhD, which is onto the miscibility of solvent systems that are relevant for metal extraction by theoretical methods. I don´t have a lot to say about that right now, as I had just a short time since the beginning, but what I saw so far makes me happy about the decision taken and for all the interested readers further news and information will come in my next posts. I wanted also to thank the whole Kirchner Group for all the help received and for the great experience I am having.

Now it is time to go back to work 🙂 Read the below and you will have an idea about what I have been doing:

Mixtures of solvents are of paramount importance in many research and industrial fields. This is due to their intrinsic nature, in fact since a mixture is composed of more than one component, the properties of the mixture itself can be tuned by adjusting the concentration of each solvent. This aspect becomes even more relevant when mixtures of particular solvents are involved. For example, ionic liquids, which nowadays are studied in many fields, due to their chemical nature can also be modified in order to achieve the best fit to the desired application. Another important aspect is the reduced environmental impact that can be achieved by the application of green solvents in the mixtures. For all these reasons, mixtures have been studied and used for several application, ranging from synthesis (as reaction media), to solvent extraction in hydrometallurgy and solvometallurgy.

Solvometallurgy implies the same processes involved in hydrometallurgy (e.g. solvent extraction), but with solvents whose water content is lower than 50 vol%, and whereas aqueous systems have been and are extensively studied also with theoretical approaches, a better knowledge over non-aqueous binary systems is missing. During my work, state of the art classical and ab initio molecular dynamics simulations were used to investigate the properties of mixture and solvent miscibility in the field of hydro and solvometallurgy. With regard to hydrometallurgy extraction processes, the study via ab initio molecular dynamics simulations of a hydrophilic ionic liquid binary mixture with and without water was operated. Currently, ionic liquids are deeply investigated for solvent extractions in both hydro and solvometallurgy paradigms. It was observed that the presence of water reduces the interplay between the ions, increasing the complexity of the liquid structure. Water affected especially the strongly coordinating anions (chloride), whereas the weakly coordinating anions (tetrafluoroborate) were almost unperturbed. Since the electronic density of the systems was treated explicitly, the charge of each atom is calculated with different methods. The resulting charge distributions were used to describe the charge transfer and, in the future, it could become the base for the development of a new class of force field for classical molecular dynamics.

With regard to solvometallurgy, state of the art molecular dynamics simulation were performed for a mixture of methanol and dodecane. By means of this study case, it was shown how mutual miscibility can be tuned by the addition of a common salt as lithium chloride, and that the addition of a common extractant as tributyl phosphate, which is often necessary for the aimed extractions, leads again to mutual miscibility. Another important aspect that was considered is the behaviour of the extractant in the interface between the two solvents, and how the structure of the interface changes depending on the chemical environment.

This information can be of paramount importance for understanding solvent extraction processes and a starting point for further improvements. It is apparent that tributyl phosphate adsorbs on the interface between the solvents and by evaluating its general orientation it was possible to highlight the effects of lithium chloride and tributyl phosphate concentration on the structure of the interface. 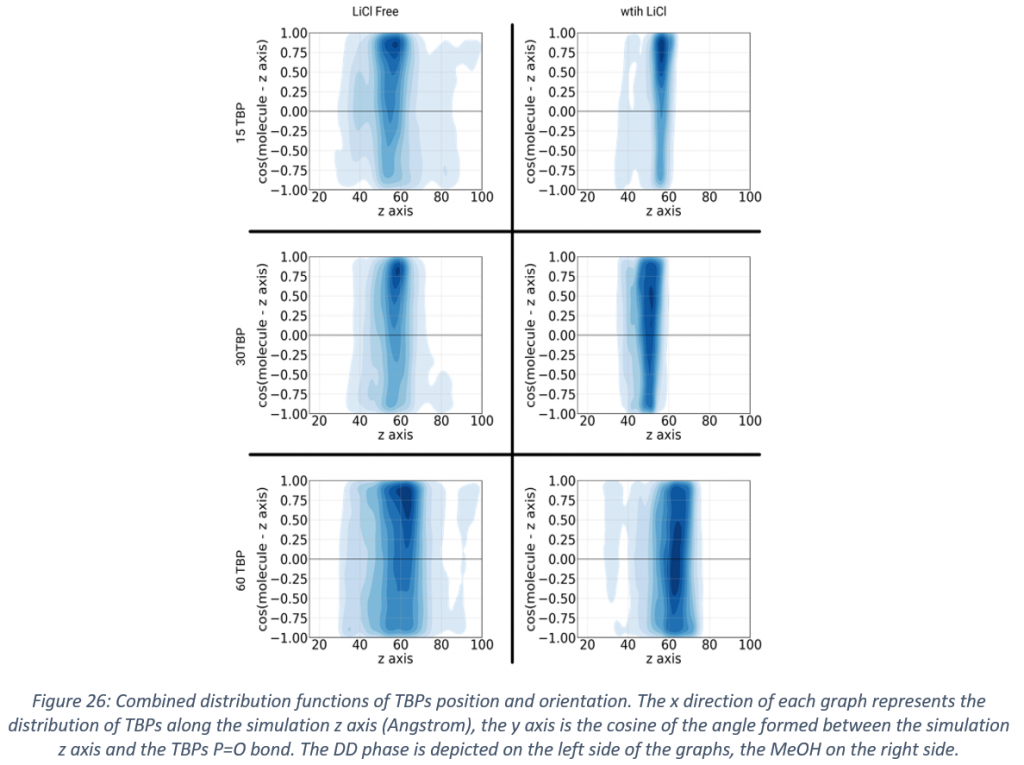 In conclusion, my work aimed at exploring the underlying principles which are the base for the application of mixtures in different fields. The results are a first step towards the understanding of these principles, and they could be the fundament for further investigations in both directions.