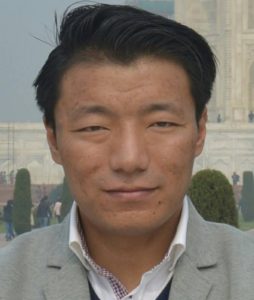 My name is Thupten Palden and I am the ESR 1!  I am a Tibetan and I grew up in a small hill station town called Dharamsala, situated at the outskirt of Himalayan mountain range in Northern India. I did my bachelors in Chemistry in Bremen, Germany and my Master studies in nanomaterial science in Utrecht, the Netherlands. I worked for two years in a Dutch chemical company called DSM near Maastricht, in the Netherlands.  My experience in the Netherlands has been unforgettable.  I enjoyed the daily bicycle rides around the canals in immensely beautiful Dutch cities, which are mostly built during the middle ages.  The Dutch people are very open and they speak English fluently, which is why I still don’t speak Dutch. For those who do not know, I must say that the Netherlands has much more to offer than the stereotypical idea of marijuana and red light district.

My experience in DSM showed me the profit-orientated, fast-changing and competitive reality of the science world. It motivated me to pursue my PhD studies. My desire to learn, to grow and to do meaningful research drove me from industry back to academia. SOCRATES is exactly the kind of project I craved for and I feel very lucky to be part of it. Through this project, I hope to learn, grow and, at the same time, contribute to society by developing chemical methods to convert vast industrial waste into a valuable resource.

In the next 3 years, I will be working at KU Leuven, Belgium on biocompatible Solvometallurgical leaching methods for low-grade industrial process residues.  Metallurgical companies extracts target metals from high-grade ores, and then dump the remaining diluted biproducts as waste in landfill sites.  However, these wastes still contain some amount of valuable metals.  I will be working on recovering those valuable metals from the wastewaters into a concentrated solution, by using non-aqueous solvents.  The conventional hydrometallurgical method uses an aqueous acid solution for leaching. In my project, the aqueous solvent is replaced by non-aqueous solvent to achieve higher selectivity with reduced water and acid consumption. I will use only use biodegradable solvents, such as bioethanol and biodiesel. The extractive metallurgical method based on the use of non-aqueous solvents instead of an aqueous phase is called solvometallurgy.

By now I lived in Leuven for almost 3 months and, I must say, it has exceeded all my expectations. I am looking forward to live my next years here in Leuven and I hope to get some good results too.

Please do not hesitate contact me if you have any questions about my project. Here is my email address: thupten.palden@kuleuven.be

Pyrometallurgical methods are often incapable of treating low-grade, metal-containing, industrial process residues in an economical way, because the metal concentrations are too low. Likewise, most hydrometallurgical processes are not very suitable for the recovery of valuable metals from these residues, because leaching with aqueous solutions of acids suffers from poor selectivity, which leads to a substantial acid consumption and impure leachates. However, by replacing the aqueous phase in hydrometallurgical processes by organic solvents with dissolved reagents, it is possible to achieve a high selectivity and reactivity because the hydration of metal ions and anions is replaced by a solvation by organic molecules, and because non-hydrated anions have a greater affinity to bind to metal ions. This leads to the objective of this PhD project, which is to find a suitable organic solvent to selectively leach valuable metals from the low-grade industrial process residues. The extractive metallurgical method based on the use of organic solvents instead of an aqueous phase is called solvometallurgy.
A novel solvometallurgical process is developed to recover lead and zinc from iron-rich jarosite residue. Jarosite is a solid residue generated by the zinc metallurgical industry. The residue contains iron as the main component and some lead, zinc, and low concentrations of valuable metals such as indium, germanium and silver. Storage of jarosite in tailing ponds has some environmental issues and it is becoming increasingly difficult to get license to open new jarosite tailing ponds. These issues could be prevented by valorising jarosite, by recovering of valuable metals and using the remaining residue in, for instance, building materials.

The jarosite was kindly provided by a European zinc producing company. The physico-chemical properties of the initial residues and leached residues were thoroughly studied using high-end techniques such scanning electron microscopy (SEM), powder X-ray diffraction (XRD), Total-Reflection X-ray Fluorescence (TXRF) and Inductively Coupled Plasma-Optical Emission Spectrometry (ICP-OES). For the leaching experiments, the initial screening of varieties of solvometallurgical lixiviants was performed at a constant operational conditions. Once the most suitable lixiviants were selected, the operation conditions were further optimised. Attention was paid to the recovery of lixiviant for reuse. In this project the solvent was recovered either via solvent extraction or vacuum distillation. 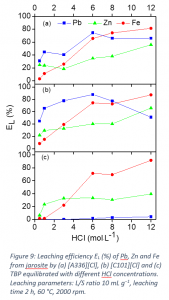 A process was developed to selectively recover lead and zinc from iron-rich jarosite residue of the zinc industry using ionic liquids Aliquat 336 ([A336][Cl]) and Cyphos IL 101 ([C101][Cl]). The screening of different solvometallurgical lixiviants showed that the presence of chloride anions in the lixiviant was crucial for the leaching of lead. The ionic liquids Aliquat 336 ([A336][Cl]) and Cyphos IL 101 ([C101][Cl]), after equilibration with HCl, leached more lead and zinc compared to the other lixiviants. [A336][Cl] and [C101][Cl] equilibrated with 0.5 mol L−1 HCl, were selected for the optimization study because of their higher selectivity toward lead and zinc and lower codissolution of iron, compared to the same ionic liquids equilibrated with a higher concentration of HCl (Figure 9). At optimized conditions, 70% Pb, 30% Zn and 10% Fe were leached from jarosite. The process produces leachate containing less Fe and it makes the downstream processes easier. Thus the metal/iron mass ratio increased from 1:4 for Pb/Fe, and from 1:7 for Zn/Fe in the initial jarosite, to over 2:1 and 1:2, in the leachate, respectively. The dissolved metals were recovered by selective precipitation-stripping with an aqueous ammonia solution. Finally, the corresponding flowsheets were developed for the recovery of zinc and lead for both [A336][Cl] and [C101][Cl].

In this study, MSA was tested for the leaching of lead and zinc from jarosite. The leaching of lead, zinc and iron increased as a function of the MSA concentration in water up to 90 vol% MSA. Higher MSA concentrations resulted in precipitate formation due to the limited solubility of the iron and zinc methanesulfonate salts in water-lean MSA. Leaching with pure MSA resulted in a pregnant leach solution (PLS) comprising most of the lead and zinc, and a precipitate comprising the majority of the iron and a fraction of the zinc originally present in the jarosite. The optimization of the leaching conditions showed that increasing the liquid-to-solid ratio or temperature increased the leaching efficiencies of the metals, especially of lead. The leaching under optimized conditions was successfully performed on a larger scale using a temperature-controlled batch leaching reactor. At optimized conditions, the leaching efficiencies of lead, zinc and iron are 100, 45 and 9% respectively. The metal/iron mass ratio increased from 1/4 for Pb/Fe, and from 1/7 for Zn/Fe in the initial jarosite, to over 2.66/1 and 1/2, in the PLS, respectively. The remaining MSA in the PLS was recovered by vacuum distillation and successfully reused for three leaching cycles.

Two novel solvometallurgical processes were developed for selective recovery of lead and zinc from jarosite using ionic liquid and methanesulfonic acid. These two systems showed superior selectivity for lead and zinc over iron, compared to hydrometallurgical processes using mineral acids. Moreover, the lixiviant can be recovered and reused. As for future work, ethylenediaminetetraacetic acid (EDTA) solution is being investigated for selective leaching of lead from other iron-rich residues. The preliminary result are very promising.